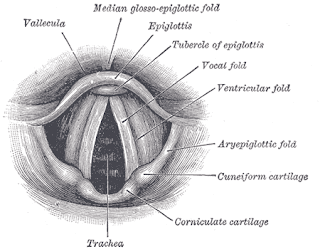 I found the following in a 2007 speech science textbook:


"Abnormal laryngeal behavior has also been implicated in stuttering. Some people who stutter contract the adductor and abductor muscles of the larynx simultaneously, rather than reciprocally. This causes the glottis to be "frozen" in either an open or a closed state. Thus, for example, if it becomes necessary to produce an unphonated sound followed by a phonated sound (as for example in the word 'so'), the speaker may still be contracting his PCA muscle (abductor) at the same time as his IA muscles (adductors). Until the conflict is resolved, the glottis cannot close and phonation cannot begin. The time needed to resolve the conflict may account for the blocks and perseverations that mark episodes of stuttering."

('Speech Science Primer: Physiology, Acoustics, and Perception of Speech' by Raphael, Borden and Harris (2007), on page 97)

Compared to most current views on the cause of stuttering, the above seems a minority view - but then the above is a speech science textbook, not a speech therapy / pathology book.  The authors' view seems similar to what Dr. Martin Schwartz (who is not only a speech pathologist, but also has a Ph.D. in speech science) has been saying for many years: that the vocal fold muscles of 1 - 2% of the population are highly sensitive to stress and tend to 'lock' when too tense, resulting in the struggle behaviour we see and hear as 'stuttering'.

Could it be that some speech scientists, as opposed to speech therapists / pathologists, are not seeing eye to eye on the cause of stuttering?
Posted by Peter Louw at 12:35 PM