Distractions - taking the mind off stuttering 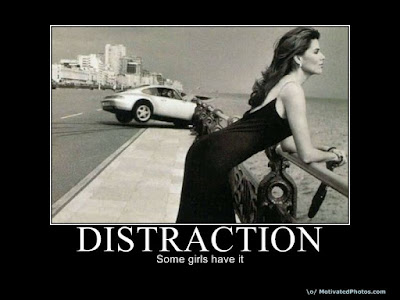 For most people, distractions play a rather negative role, as in the picture above. They take your mind off things that are, or should be, more important – such as the traffic, doing your homework or working on a task in the office.

For someone who stutters, however, a distraction can have a somewhat beneficial effect in that it may temporarily make you more fluent – fluent enough to say that difficult word, or get through that problematic sentence; though some People Who Stutter (PWS) find that a distraction actually makes speaking more difficult as it interrupts their train of thought, so increasing their tension. Whatever the PWS's response to a distraction - for some reason the role that distractions play, both in stuttering and in therapy, is under-emphasised by speech therapists as well as PWS themselves.

This under-emphasis on distraction as a factor in stuttering is one of the reasons why so much confusion surrounds stuttering.  It would even appear that some therapists either have no knowledge of the nature of distractions, or deny that these impact on stuttering.

Recently I was shocked by a survey appearing on stuttering websites from a student speech therapist doing research for an assignment on secondary stuttering behavior (eg. stamping your foot or blinking your eyes before saying a word). From the questions in the survey it was clear that the student had no idea that the cause of secondary stuttering behavior is rather simple. Secondary stuttering behavior is merely distraction behavior.  An individual who blinks his eyes before speaking may have found that, in the past, this seemingly natural and inconspicuous action, which is socially acceptable, has helped him to pronounce a sound on which he would otherwise stutter – because the action momentarily distracted him from the feared sound. So when he again experiences a stuttering block, he uses this trick – the eye-blinking  – to free him from the block. When the trick succeeds, he is rewarded by saying the word fluently. In this way the trick is, through the principles of behavioral learning, reinforced and gradually becomes established as a learned habit.

Unfortunately the distraction behavior tends to have a temporary effect, because in the course of time the mind becomes accustomed to the distraction so that it gradually loses its fluency effect. As a result a stronger distraction is needed to be effective – the innocuous blink becomes an unnatural, socially unacceptable tight closing of the eyes. But in time even this loses its effectiveness. So the PWS is now worse off – not only does he stutter, he also exhibits unnatural eye-blinking which has become a learned habit.

As secondary behaviors are learned, they can be unlearned. If you do suffer from secondaries, try the following procedure:


What is/are the physiological or psychological reason(s) for the fluency obtained through distractions? I am aware of at least two possibilities, though of course there may be more:

1) The distraction momentarily reduces vocal cord tension, so releasing the locked vocal cords; and/or
2) The distraction prevents the conditioned stuttering reflex from firing. For instance, say that a teacher asks Johnny to state his name in class. Johnny knows that saying his name usually results in a stutter - similar bad experiences in the past have proved it. In other words, he has been conditioned to stutter on his name when in stress. Stated in terms of conditioning theory, he will stutter when two stimuli are both present: He is in stress (stimulus 1), AND when he intends to say his name (stimulus 2). However, a fraction of a second before he starts saying his name, another learner sneezes. This sneeze momentarily takes Johnny's attention off his name. As a result the conditioned stuttering response cannot be triggered, and he is able to say his name fluently.

Literally ANYTHING that will take your mind off the feared word or sound, can break the block. Intense emotions such as anger or aggression can serve as distractions. Even the block or the stutter can distract you from the source of the stress. Very fast speech can serve as a distraction. EVEN STRESS ITSELF, which usually aggravates stuttering, can distract one from stuttering, as is clear from the following example from The Nature of Stuttering, by Charles van Riper, as told by one of his patients:


A member of a submarine crew discovered a serious problem within the submarine’s machinery. To his own surprise he managed to rattle off a series of rapid emergency orders even while under huge pressure. He was 100% fluent (though his hair turned grey afterwards!) and ascribed his fluency to not really thinking about his speech due to the seriousness of the situation.

Many PWS have described similar surprising bouts of fluency. Another telling example illustrating the workings of distraction comes from the Netherlands, as far back as the Second World War. A speech therapist remarked being struck by the fact that his patients had few speech problems during the time that Germany invaded his country (May 1940). During a three-week period in which the entire country was in chaos, his patients also stayed away from his consulting room. Gradually the situation stabilised and ordinary life was resumed.

When his patients returned, they more often than not said that their speech had been excellent during that period. One of them explained it this way:

What is happening now is of such magnitude that one’s personal problems seem insignificant. When the survival of one’s country is at stake, one’s personal difficulties become unimportant. (P Faber, Achtergronden van stotteren en spreekangst, 1979)

It is known that some PWS’s change their environment for the purposes of distraction, in an effort to be fluent. Dr Martin Schwartz mentions the case of an individual who not only changed his name, but his employment and city of residence as well – the novelty distracted his attention from his speech. Naturally the improvement did not last long, as his mind gradually became used to his new environment, so that the stutter re-emerged.

Even a fluency technique taught to a PWS by a therapist can serve as a distraction,  taking away one’s attention from feared sounds. If, however, the technique is entirely dependent on its distraction value, it may only have a temporary beneficial effect.

Various therapies are built around the distraction phenomenon. The strange mouthpieces which were sold to PWS’s in the 19th century were merely distraction gadgets which intentionally made it difficult to speak normally, and so distracted people that they would not stutter. Many masking types of apparatus also seem to be based on distraction to a greater or lesser extent. The SpeechEasy appliance, which creates a choral effect in your ear so that, when you speak, it sounds as if you speak in unison with others, has helped some PWS’s, with distraction probably playing a large role – and as the effect of distraction is temporary, it is no surprise that many users of the SpeechEasy have only experienced temporary relief. The ‘syllabic speech’ technique, also called ‘rhythmic speech’, where you learn to speak in rhythmic syllables, also seems to be largely a distraction technique.


This is not to say that distraction as a technique or as a therapy approach is of no use to the PWS.  Sometimes it is better to have some fluency, even if it is temporary. The informed PWS, however, should be aware of the effect of distraction and its nature. It can be of use, but don’t be fooled by the temporary fluency so obtained – and don’t fall for quick-fix therapies that are wholly based on it. Also: if we appreciate the nature of distraction as a phenomenon in stuttering, stuttering itself becomes easier to understand.
Posted by Peter Louw at 6:14 PM